Semantic Web and Semantic Annotation for newbies: a very introductory presentation of the StoM project

I was asked to write in a simple way a presentation of the StoM project and the technologies behind it. What follows is the final result: I decided to post it here, so that it can hopefully be reused when some of my friends (very often indeed) asks me what Semantic Web is and especially what the heck is a semantic annotation!
I dearly hope my attempt to explain clearly these concepts has succeeded: to paraphrase one of Einstein’s most famous quotes, if you can explain a concept in a simple way, it means you have really understood it... Did I??? 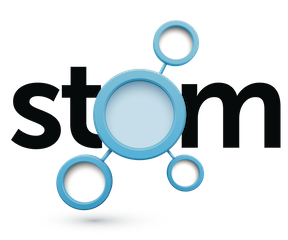 StoM reuses the results of a previous EU funded research project named SemLib, in which two main outcomes were produced: an annotation system and a semantic recommender. Both exploit Semantic Web technologies in their internal mechanisms.

First of all, Semantic Web is about adding explicit “meaning” to objects and services on the web: this meaning is expressed through metadata that can be unambiguously interpreted by software agents. It is about making software systems automatically understand each other.

This should not be confused with Artificial Intelligence: there’s no “imitation” of the cognitive processes of the human brain but simply the use of formal metadata to “better describe” a certain context on which a software operates. This “better description” consists of multiple ingredients:

1. using a specific convention to express information. This can be seen as the syntax for describing things. In particular Semantic Web has at its foundation a model based on “triples”, that is assertions of the form:

Albeit very simple in nature, this model is incredibly expressive and resorts in creating “a graph of facts”. “Deduction” by software agents is obtained by navigating and querying this graph. To better explain this concept I borrowed the two following images, both taken from the brilliant presentation Semantic Data Management in Graph Databases by Maribel Acosta: they show a graph that models authors, papers, conferences, the logical relationships amongst these concepts and how queries are resolved by navigating the graph structure. 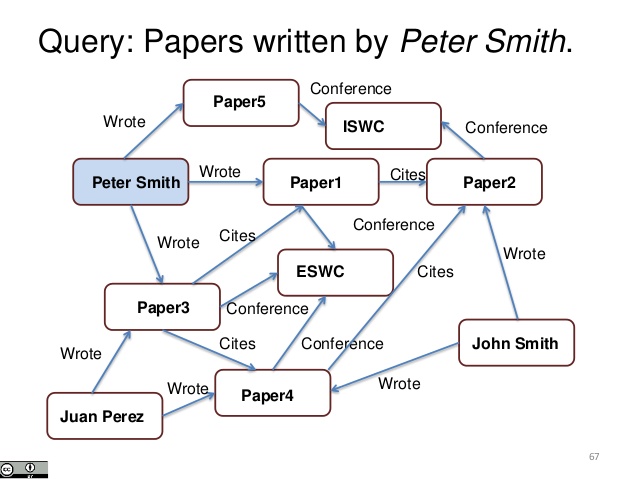 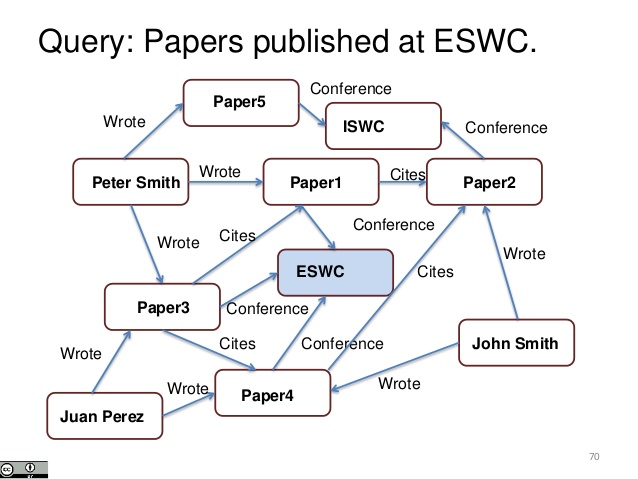 2. using standard formalism to express triples, in particular the RDF (Resource Description Framework) modeling language. This can be seen as the grammar for describing things.

3. using “vocabularies” to express concepts, possibly those accepted as standards. This is incredibly important: to allow software agents “understanding" concepts and assertions, they must share the knowledge of the domain (isn’t it the same for humans?).

Multiple standard vocabularies are available for representing specific knowledge domains and use cases. For example:

4. publishing on the web description of objects, so that they can be identified by their URI/URL.

5. linking information/metadata around, to enrich the amount of information available, exploiting those already specified elsewhere.

For example, the triple:

contains two real navigable set of information in the Subject and Object (together with the property “likes” of the “Citation Typing Ontology” vocabulary). One can exploit the semantic information of the two specified URLs to infer information about the Subject (Luca De Santis is a Person, works for Net7 srl, his job title is IT Consultant and his contact point is his Twitter account - https://twitter.com/#!/lucadex) and the Object (Nine Inch Nails is a Music Group of Industrial Rock).

Semantic Web has been one of the most discussed technologies for more than a decade (this term was introduced in a seminal article by Tim Berners-Lee on Scientific American in 2001!). After the hype has cooled down (so much that a lot of people completely lost interest on it) it has gained wide adoption in several fields, including: search (see below), SEO or the integration of content with Social Networks. The Open Data movement also boosted a huge interest in Semantic Web, because it is obviously important to describe free datasets in terms that can be easily understandable by automatic software agents. Likewise the widespread adoption of API services by software vendors could possibly in a near future be strictly linked to Semantic Web, since its technologies can provide better descriptions to application services and the data they ingest and produce.

Very often Semantic Web is associated to search: albeit sometimes this happens a bit too lightly (when this term is confused with natural language processing) it is also true that Semantic web can really empower enterprise search. In fact, while normal search engines can only recognize word occurrences, with semantics it becomes possible to identify "concepts" and disambiguate synonyms (eg. FED vs Federal Reserve System; Wall Street vs the New York Stock Exchange) or words with multiple meanings (Rock: Music or Geology? Wall Street: the NY District? The Movie? The Stock Exchange Market?). It’s not a case that Google is investing a lot on its Knowledge Graph, that exploits semantic information to enhance the search engine’s results.

The products at the basis of StoM exploit in their very nature Semantic Web technologies.

In particular the Semantic Annotation System allows users to add annotations on textual documents, published on the web. Annotations can be seen as the equivalent, for digital documents, of applying textual notes, underlines, highlights on paper documents or books (the so-called “marginalia”).

Annotations can be applied on a web page by using the familiar metaphor of adding marginalia on documents (see on this regard the brilliant W3C’s Web Annotation Architecture animation). They can be extremely beneficial for those that must manually process a great deal of documents (think of Students, Digital Humanities Scholars or Professional Categories like Lawyers).

Making use of Semantic technologies, it is possible to enrich the meaning of annotations and describe them, at least “internally”, through formal assertions. This way annotations are no longer simple textual comments but become statements (that is, triples) that are stored in a central repository. Formal, structured data can be therefore assigned to textual documents, which are naturally an unstructured form of data.

It is crucial that the annotation process is simple and intuitive for users: for example one should apply formal semantics to a web page by simply highlighting a piece of text and declaring in few steps its type (eg “Yellen” is a Person) or by linking it to an entry of a public dataset, like DBPedia/Wikipedia (eg. “Yellen” “is the same of” http://dbpedia.org/resource/Janet_Yellen). The latter action is very useful: this way the system can automatically “import” all the meaningful references stored in the remote dataset (like the fact that Janet Yellen is a woman and that she is the Chair of the FED) to enrich the available knowledge.

Annotations can facilitate semantic search engines to provide more suitable results. For example “power searches” that these systems can perform are:


The document of the example above will be returned in both cases if the search engine can make use of the annotation on the word “Yellen”, even if the rest of the text doesn’t include any mention of Susan Yellen’s gender or of her role at FED.

Semantic Annotations therefore allow a better management of the knowledge that can be extracted from digital documents and opens the way for a more fine-grained reuse of this knowledge.

The efforts in StoM for the Annotation System will be mainly concentrated on four areas:

1. Usability: providing an annotation tool that is very simple and intuitive to use. Users should apply semantic annotations with the same conceptual effort of highlighting with different colours sentences in a textual document.

2. Facilitating the annotation process by transparently intepreting metadata in the page (title, language, SEO descriptions, ...) and through the integration of entity extractions services, like SpazioDati's DataTXT. This way annotations can be automatically created and presented to the user, for approval or rejection.

3. Providing a comprehensive environment to manage the annotation of web documents. Users can create “notebooks” to store annotations, share them with friends and colleagues, search amongst them and export their data in various formats (even Office Documents) for further reuse.

4. Proposing predefined use case scenarios, to address the needs of specific categories of users. For example, scholars or lawyers when logged in, will find, preloaded, all the vocabularies that specifically refer to their professions.


StoM's Semantic Recommender on the other hand uses Semantic Web technologies to provide better recommendations to users. This can be valuable in multiple scenarios, from E-Commerce (“You bought this: try that”) to News site (“You read this: check also that”).

The system uses the information of public semantic web data sources (like Wikipedia/DBPedia, Europeana, Jamendo, etc) to enrich the descriptions of certain items on which the recommendation should be based on and to create links and references amongst them. The engine navigates the resulting graph to find the items that can be interesting for a user according to her profile, the history of her purchases or the web pages she most liked.

In the example before it was known that Luca De Santis likes the band Nine Inch Nails. By navigating the DBPedia graph from the Nine Inch Nails entry, the system can automatically create a list of all associated bands and propose it to the user (“Luca, you like Nine Inch Nails, try also Skinny Puppy and Cabaret Voltaire!”).

In SemLib, the previous research project, this technology was basically at a very prototypal state. In StoM it will be reengineered to make it more robust, efficient and general-purpose (to make it suitable in multiple real life scenarios). Other recommendation techniques (eg collaborative filtering) will be also tested and, if effective, implemented in the system. A lot of attention in fact will be devoted to performance: the recommender in our vision should become a cloud based service so it must be essential to guarantee a linear scalability in terms of the amount of data that it can manage, by ensuring also consistent processing times, both for updating its internal indexes and for responding to recommendation queries. The choice of the most suitable recommendation algorithms must also take in consideration these aspects.


Despite the increase in adoption of Semantic Web technologies, we think (hope!) that the products that we are focusing on in StoM address a niche market that hasn’t been fully satisfied yet. For example, while several big vendors provide annotation services nowadays (think of Evernote) none of them present a model based on semantics, limiting the annotations to textual comments. This greatly hinders the chances of reuse of the information, making these services sometimes too limited for power users.
In StoM we are concentrating on identifying business needs that can be satisfied by our Semantic Web-powered technologies and to design services that can hopefully generate a real interest in the market.


Thanks to Francesca Di Donato (aka @ederinita) for reviewing this post and for providing precious hints, and to Natalia Mielech (aka @nmielech), who sparked the need to explain what we are trying to achieve in StoM to everybody, and not only to hopeless nerds like me!

Posted by lucadex at 5:16 PM No comments: