There’s Semantics in this Web 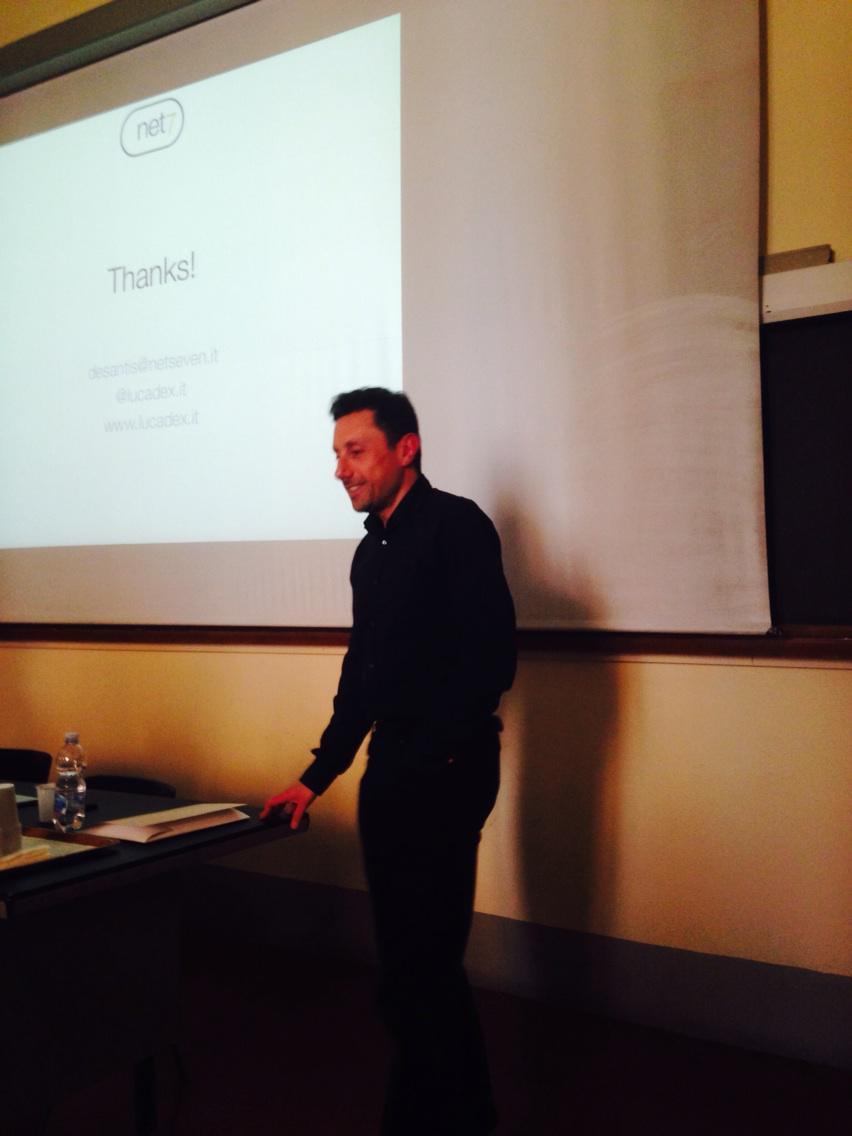 I was asked by Dr. Serena Pezzini of the CTL department of the Scuola Normale Superiore of Pisa to do a presentation on the Semantic Web on April 16th (beside there’s a photo of me taken at the event). Slides, in Italian, are available on SlideShare: the preparation has been a quite interesting process, so I thought to share it in this blog here, this time in English.

This presentation for me was in fact like opening up the legendary Pandora’s Box. It ignited a reflection about what we as a company do regarding the Semantic Web. Net7 in fact always characterizes itself as a “Semantic Web Company".

At about the same time I was contacted both by CTL and by a partner company to talk about this subject. On the one hand CTL expected suggestions and stimuli to use Semantic Web technologies in their work on the Digital Humanities field. The partner company was looking for professional training on these topics.

For 5 seconds I went into autopilot mode and started to think about explaining the Semantic Web in the standard fashion (RDF, ontologies, triple stores, SPARQL, RDFS, OWL, well, you got the idea…). Then three questions sprang to my mind...

Do these persons really need this kind of information? Are they going to really use all of this on their daily job?

The second question is a bit discomforting: do we at Net7 really use completely and especially consciously the whole of the Semantic Web technologies?

The third is even more serious: what’s the current state of the art of the Semantic Web? Is it still an important technology, with practical uses even for middle/low-sized projects, or should it stay confined in the Empyrean of research and huge knowledge management initiatives?

So, it was really important for me to do a presentation with the attempt to find answers to these questions, to present topics that could be of interest and useful to the audience and at the same time to put in a new perspective my knowledge on the field.

The presentation therefore came out as a reflection on the possible uses and advantages of "Semantics in the web", first and foremost for me, in order to reorder my mind, with the hope that it can be useful for others as well. I tried therefore to take a step back, hopefully to progress further in perspective.

For its preparation I read a great deal of material (see bibliography at the end) and was heavily influenced by the presentations and articles of Jim Hendler (not to mention the fantastic book “Semantic Web for the working ontologist” that he co-authored). So, even if you won’t read these lines, thank you very much Dr. Hendler for your insightful thoughts!

Coming back to my presentation, it is not a case that I used the concept “Semantics in the Web” and not “Semantic Web” in the title. Semantics in fact, in the light of all the readings that I did, seems to me more important than the technology behind it.

I started the presentation with a small historical digression, from the very first vision of the World Wide Web in the Tim Berners-Lee's 1989 original proposal, up to the seminal 2001 article on Scientific American, where Berners-Lee, James Hendler and Ora Lassila presented the Semantic Web.

I continued by explaining the key concepts of the Semantic Web, which served to prove how Semantics, despite the Semantic Web vocal critics, can still count huge success stories in the web of today.

The funny thing is that the Semantic Web’s vision didn’t exactly materialize as expected by its inventors. On the one hand is fundamental to comprehend how things in web history just happens through serendipity. On the other is crucial to have always in mind the Jim Hendler’s motto “a little semantics goes a long way”. Indeed just a small portion of the Semantic Web “pyramid” (see slide number 42 in my presentation, taken from a Jim Hendler’s keynote) finds a recurring use, while the rest (inferences and the most sophisticated OWL constructs included) has still a limited diffusion or is just relegated in high-end research initiatives.

So the Semantic Web hasn’t failed but materialized a bit differently than expected. One therefore should really think to Semantics first, that is to exploit the knowledge that can be extracted from documents, linked data repositories, machine readable annotations in web pages (SEO metadata included) before worrying about the orthodox application of the complete stack of Semantic Web technologies.

The Semantic Web is on the other hand a still promising and on certain aspects undiscovered territory. While I don’t honestly see it as a key technology to power web portals (there are plenty of more mature technologies, even open source, - think of Drupal or Django - that fit better this purpose) the idea of managing information through graph makes a lot of sense in several areas, including:
The latter is something that we @ Net7 would really like to explore in great details in the near future. The idea arises from a contact that we have with a local medical research centre: we noticed that very often their management of data acquired through sensors is untidy. This leads to data loss and corruption. Moreover, raw data after the medical research is over, gets dismissed. On the other hand if this data could be:
it might open the door for its reuse. This way scientists from all over the world can take this data and exploit it in their research, increasing the dimension of their data sets and consequently improving the probability ratio of their experiments. This isn’t something new indeed but it will become more and more relevant in the near future since the European Commission is fostering Open Access to research data in the Horizon 2020 projects.

I concluded my slides by also noticing that Semantics is becoming more and more a commodity, offered through specialized cloud services. Named Entity Recognition SaaS offerings, SpazioDati’s DataTXT and AlchemyAPI included, are a consolidated reality. Cloud Machine Learning services are becoming mainstream (see in this regard this insightful article on ZDNet). Developers therefore can enjoy “a little semantics” in their application, without embracing the Semantic Web in full. As Jim Hendler says in fact… a little semantics goes a long way!